In the beginning, the Bulldog athletic teams were supported by an enthusiastic group of cheerleaders and a lively mascot. Beauregard I was born April 25, 1951 in Dallas, Texas. Mr. and Mrs. Jimmy Morris bought Bo there and brought him to Corsicana, Texas to make his home. Mr. Morris graduated from Navarro in 1948. “BO” was a four-year-old Zorro Torro and comes from a long line of champions. BO became the mascot of Navarro Junior College in September of 1955 when the Morris’ unselfishly consented to give NJC their mascot to live on the campus so that he might be taken to all school activities. 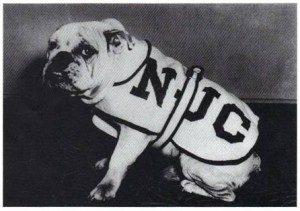 Beauregard I was born April 25 1951 in Dallas TX. We thank Mr. and Mrs. Morris for giving Bo to NJC because he was a symbol of the spirit of our school. Bo resided adjacent to the Executive Suite, an annex of the boys’ dorm. He was originally cared for by two members of the football team, Bucky Slaughter and Jimmy Labar. BO attended all of the Navarro football games until his death in 1961.

Mr. and Mrs. Jay Brown donated a replacement for BO, another bulldog named Timbo. His reign as team mascot was rather short lived, however, as he died in 1963. Doc Hanks, President of the Student Senate, and Billy Dyer, President of Circle K, directed a drive to raise $200 to purchase the next mascot, named Empire. However, Empire was struck and killed by a car after the purchase. ln the summer of 1968, Bob Corley, son of the onetime Board of Trustees member John Corley, presented a one-year-old bulldog named Precious to carry on the tradition of the Navarro College mascot. Once Precious’ tenure as mascot ended in the mid 1970’s Navarro College did not retain another mascot for several years. 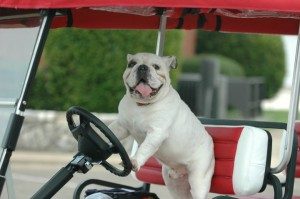 During a summer administrative retreat prior to the 2006 fall semester Navarro College President Dr. Richard Sanchez voiced a need to embrace Navarro’s history and traditions. Phil Sims, the Director of Student Activities mentioned the return of the live mascot. Administrators in attendance thought it would be a great idea, so it was decided that Navarro College would purchase a new bulldog and have an employee volunteer to be the caretaker of the new mascot. Mr. Sims was that volunteer. Researching Navarro’s history the name of the mascot was to be “Beauregard V”. Since he would be the 5th live mascot in Navarro history, he would be named in honor of the original mascot. “Beau V” served Navarro College proudly for six years until his passing during the football season of 2012. Beau V was such an amazing influence on the campus and his memory will not be forgotten, but carried on by his blood nephew.

Beauregard VI hails from the same breeder and family as the previous mascot. We are excited to continue on the legacy of Beauregard here at Navarro as “Beau VI” proudly walks the Corsicana campus. Beau VI loved being in the spotlight.

Beau VII is frequently seen on campus and enjoys spending time in many administrative offices, however prefers the comforts of the Marketing and Public Information Office in the Administration Building. When you visit campus be sure you come by and see a legend in the making! 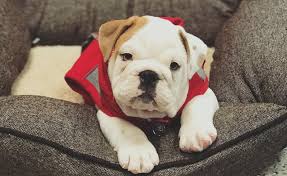